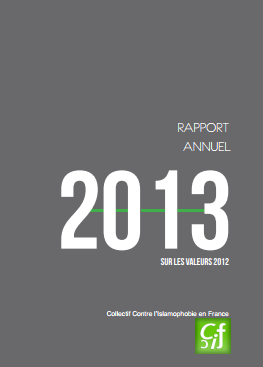 The Committee against Islamophobia in France (CCIF) says there has been a steady rise in anti-Muslim acts in France in recent years. The CCIF said in its annual report on Wednesday that the number of anti-Muslim acts jumped to 469 cases in 2012 from 298 in 2011, and 188 in 2010.

The report also denounced France’s civil service as “one of the principal vectors of Islamophobia” as it said bureaucrats often over-interpreted official secularist policies to incorrectly reject to serve Muslim women who wear Islamic headscarves.

According to the law, civil servants and girls who attend state schools are banned from wearing headscarves, but adults using a public service are not. However, some French officials refuse to conduct a civil wedding or issue documents if the woman concerned covers her hair, the report said.

The CCIF report added that anti-Muslim acts have increasingly targeted people, especially women, adding that assaults against mosques had approximately doubled in 2012 compared with the year before.

The group also hailed a decision by the European Parliament on July 2 to remove the legal immunity of far-right French leader Marine Le Pen as CCIF President Samy Debah said Le Pen and other politicians were changing anti-Muslim rhetoric into a commonplace trend.  The decision aims to make possible putting Le Pen on trial on racism charges for comparing Muslims praying in the streets in France to the wartime Nazi occupation of the country.

“There is a link between the political discourse and the rise of these violent acts and discrimination against the Muslim community,” Debah told a news conference. Debah also expressed hope that an investigating magistrate would order Le Pen to stand trial for making hostile remarks about Muslims praying in the streets, which takes place when small mosques are filled with worshippers.