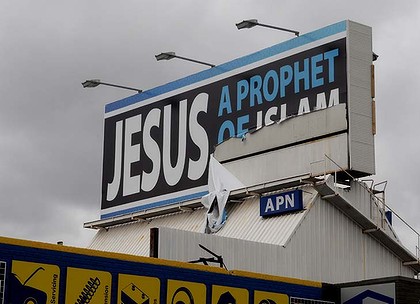 A Catholic bishop has slammed controversial Islamic billboards for being “provocative and offensive” and he’s calling for them to be removed from prominent locations across Sydney.

The billboards carrying the slogan “Jesus: a prophet of Islam” were erected late last week in Darlinghurst, Rozelle and Rosehill. They have been paid for by Islamic group MyPeace, which wants to encourage Christians and Muslims to find common ground by raising awareness that Islam believed in Jesus Christ.

But Bishop Julian Porteous, from the Archdiocese of Sydney, says Christians believe that Jesus “is more than a prophet”. “He is the Son of God. He is acclaimed Lord and Saviour of humanity,” he said on Monday. “In Australia with its Christian heritage a billboard carrying the statement ‘Jesus A prophet of Islam’ is provocative and offensive to Christians.”

Bishop Porteous, whose comments come a day after the Darlinghurst billboard was vandalised, said it was important religions don’t antagonise others with “provocative statements”. “For the sake of preserving social harmony and respect between major world religions these billboards should be withdrawn, along with others which carry messages directly offensive to Christians,” he said.

But MyPeace organiser Diaa Mohamed told Fairfax he had received “overwhelmingly positive feedback from Christians, atheists, Muslims, everyday Australians” while the vandalism “validates the reason they went up in the first place”. And he said he wasn’t deterred from plans for similar ads – with such slogans as “Holy Quran: the final testament” and “Muhammad: mercy to mankind” – on buses travelling through the city and in the Hills district.

Bishop Porteous believes they are having a very different impact. “The campaign organisers profess the billboard advertisements are to inform but in effect they have provoked a response reflected in the vandalism we saw at the weekend,” he said.

Of course, Bishop Porteous wouldn’t condemn advertising hoardings reading “Jesus: the son of God” for offending non-Christians. But he does condemn as “offensive to Christians” an advertisement announcing Muslims’ respect for Jesus as a prophet. According to Porteous, Australia’s “Christian heritage” requires that minority faiths should refrain from publicising those aspects of their beliefs that conflict with the teachings of Christianity.