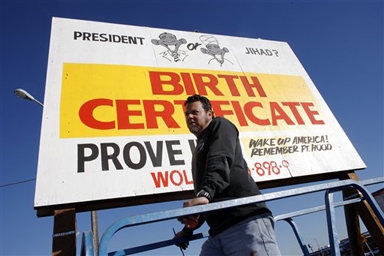 Today, a new birther billboard went up above Wolf Automotive off I-70 in Wheat Ridge, Colorado. The sign has a picture of President Obama wearing a turban, asking, “President or Jihad?” and exhorting, “Wake up America! Remember Fort Hood”.

ThinkProgress spoke with Phil Wolf, the owner of the car dealership. He said that the billboard is his personal project because he believes the American people have a right to know the facts about the president:

“I’m probably like a lot of other people that have asked the question, I want to know who our president is. And to date, I don’t think I know, I don’t think a lot of people know, I don’t think it’s ever been asked – answered…. When this Fort Hood massacre occurred, and I saw the response of our Commander in Chief to this unbelievable, politically correct, nonsense – to me it was just enough.”