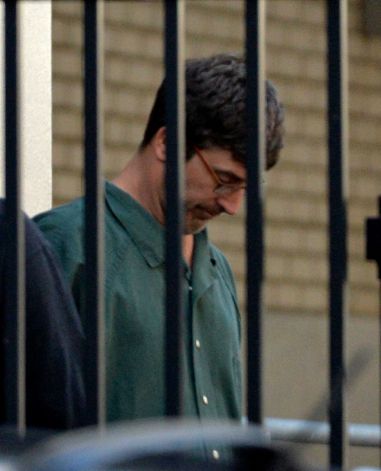 After nearly seven months, federal prosecutors have decided to move forward with charges against one of two men charged with conspiring to build a portable, remote-controlled device designed to deliver fatal doses of radiation to Muslims – or “medical waste,” as the plotters called their intended targets.

Glendon Scott Crawford, 49, [pictured] was charged in an indictment last week with attempting to produce a radiological device, conspiring to use a weapon of mass destruction and distribution of information related to weapons of mass destruction. Another suspect, Eric Feight, 54, was named in the original complaint but was not indicted. Both were arraigned last June.

According to sources who spoke with the Times-Union of Albany, Feight and his lawyers are working on a plea agreement in exchange for testimony against Crawford.

The case has been under investigation by a Joint Terrorism Task Force since at least April 2012, when Crawford went to a Schenectady synagogue, Congregation Gates of Heaven, and “asked to speak with a person who might be willing to help him with a type of technology that could be used by Israel to defeat its enemies while they slept.”

Crawford, with Feight’s help, had designed a device he described as “Horoshima on a light switch.” The device, he explained, was a “weaponized radiation device” that would deliver a deadly dose of radiation.

“[T]he target(s) and those around them would not immediately be aware they had absorbed lethal doses of radiation and the harmful effects of that radiation would not become apparent until days after the exposure,” court documents say.

Shortly after the pair began pitching their device, the FBI began monitoring and recording much of Crawford’s communications, including attempts to solicit financing from two Jewish organizations. Then, in August 2012, Crawford traveled by car from his home in Albany, N.Y., to North Carolina to meet and solicit funding from an unidentified “ranking member of the Ku Klux Klan,” specifically the Loyal White Knights of the Ku Klux Klan, who cooperated when contacted by FBI agents.

In early October of that year, Crawford traveled to Greensboro, N.C., to meet with a cooperating witness and two undercover FBI agents who posed as “Southern businessmen of means who were associated with the KKK.”

While his attempts to sell the device to organizations with conflicting ideologies might be perplexing, Crawford identified himself in conversations recorded by the FBI as “a member of the Ku Klux Klan, specifically, the United Northern & Southern Knights of the Ku Klux Klan” and there was no mistaking what he intended to do with the device.