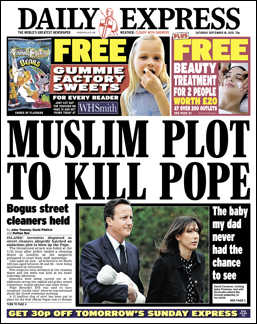 It has now been widely reported that the six Westminster street cleaners arrested in connection with an alleged plot to attack Pope Benedict have all been released without charge. The arrests apparently resulted from someone overhearing them make a joke in their works canteen about assassinating the pontiff.

You’d be inclined to suspect that the men being of North African origin might have had something to do with them being reported to the authorities in the first place. And while the police have a duty to investigate such reports, you can’t help feeling that there would have been rather less of an over-reaction if the joke had been made by participants in yesterday’s overwhelmingly white protest march against the pope’s visit.

Moreover, as Tabloid Watch observes: “Hearing the six men have been released without charge may come as something of a shock to readers of the Express who had been told on Saturday that the men were almost certainly guilty, having hatched a ‘Muslim Plot to Kill Pope‘.”

Tabloid Watch quotes some of the disgraceful statements in the Express article. The arrested men were described as “Islamic terrorists disguised as street cleaners” and readers were told that “the threatened attack was foiled at the 11th hour after police raided a cleaning depot in London”, although there was no evidence that the men were terrorists, Islamic or otherwise, or that there was any real threat of an attack.

Eager to hype up this supposed threat, the Express claimed that it was “feared plotters with links to Al Qaeda planned ‘a double blow to the infidel’ by assassinating the head of the Roman Catholic church and slaughtering hundreds of pilgrims and well-wishers” – though who exactly feared this apart from the Express itself, and who the “double blow to the infidel” quote was from, was left unclear.

And, in order to tie the terrorist threat into its obsession with irregular migrants, the Express added: “An investigation is also under way to determine if the foreign nationals had entered Britain legally and were entitled to work here.” This despite the fact that there was no evidence at all to indicate that the men were in the UK on anything other than a legal basis.

As the Tabloid Watch piece concludes: “The question is what will the Press Complaints Commission do? As there are six men directly involved they will only consider a complaint from one of them. Although it would be understandable if they didn’t want to remain in the public spotlight, let’s hope they do complain. But if they don’t, the PCC should consider acting anyway.

“The Express used its front page to smear six men as Islamic terrorists with links to Al-Qaeda. A front page correction, retraction and apology must follow.”

Update:  And see Tabloid Watch for details of the Express‘s coverage in Monday’s edition of the news that the “Islamic terrorists disguised as street cleaners” had all been released without charge: it amounts to a single sentence buried at the bottom of an article on page 9. 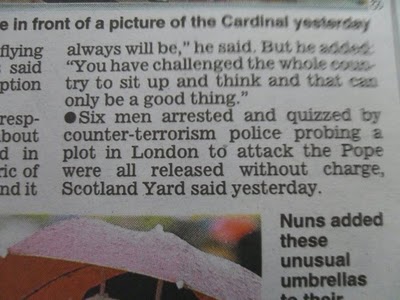