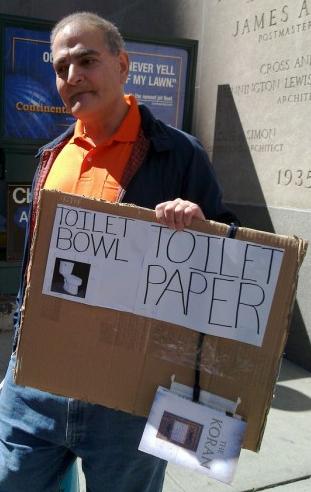 As predicted, the threat by Geller and Spencer that only American flags would be permitted on the demonstration and that signs would be “confiscated” was widely ignored.

In addition to posters with the word “Sharia” in dripping blood and flyers reading “No Obama’s Mosque”, slogans included “What God Do You Kill For?”, “Cordoba=Conquer, Not Here!”, “Muhummad was the First Radical Muslim: Osama bin Laden is Following Directions” and “Transform Islam, Not America”. One man carried a placard with the word “Toilet Paper” and a Qur’an attached to it.

Update:  Salon.com has a selection of leaflets distributed on Saturday’s demonstration.