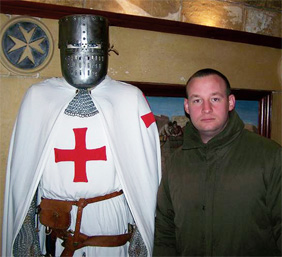 Anyone wanting to stage an event in Luton, Beds, has to seek permission from the council’s Safety Advisory Group. But while fanatical Muslims were given the green light to gather and scream insults when the Royal Anglian Regiment returned from Iraq last month, an application for a St George’s Day celebration this month was turned down.

Approval has also been granted for events to mark the birthday of the Prophet Mohammed and the death of his grandson.

Of course, the Daily Star omits to mention that the individual who applied to organise the St George’s Day parade was Paul Ray, author of the far-right Lionheart blog, who is currently on bail facing a charge of incitement to racial hatred. See here and here.

“What is so disconcerting about all this is the way the Star is fuelling the delusional hate-filled rantings of people like Paul Ray with stories like this. The story is clearly supporting his agenda in the way it frames this story. It pushes a false claim about St George being banned despite a weekend long event dedicated to him and sets up a ‘them and us’ clash against Muslims. The Star sides with Ray, Ray sides with the BNP. So where does that leave the Star?”

Update:  The Star has now amended its headline to remove the reference to St George being “banned”.