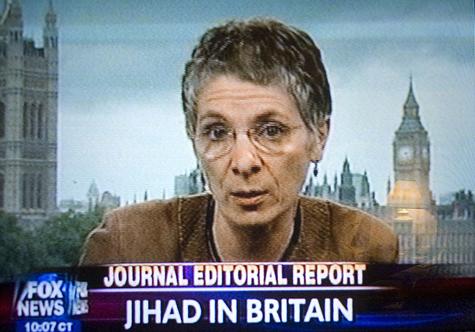 “People like myself who have warned for some years now about the steady Islamisation of Britain receive a torrent of scorn and abuse from the so-called custodians of our culture. Terms such as ‘scare-mongering’, ‘exaggeration’ or ‘alarmism’ tumble out alongside the inevitable ‘Islamophobia’.

“Now we can see what these cultural kamikazes are helping bring about. In the east London borough of Tower Hamlets, a man with links to radical Islamism, Lutfur Rahman, has been elected Mayor of the borough, giving him control of a million-pound budget and a platform for the progressive intimidation and silencing of British Muslims who do not want to live under sharia law, let alone the non-Muslim majority in the area.

“In order to know anything about this crucial development, you have to read the Telegraph‘s Andrew Gilligan who has been closely following what’s been going on in Tower Hamlets during the past year.”

Phillips goes on to cite an article in today’s Mail on Sunday, which reports on a proposal to merge the Anglican diocese of Bradford with Ripon and Leeds due to financial problems caused primarily by a decline in church attendance. For Phillips, this demonstrates that “the indigenous culture of this country is under siege” from Muslims. According to her:

“The crumbling of church membership is due overwhelmingly to a profound loss of spiritual purpose and moral nerve within the Church of England – and the vacuum is being filled by Islam. Instead of defending its own territory, and with it the religious and moral underpinning of British society, the CofE has decided to stamp upon its Jewish theological roots and instead appease – through its strategy of Christian-Muslim dialogue – the creed that seeks to supersede Judeo-Christian culture.

“The outcome is that Britain’s establishment is actively assisting the progressive Balkanisation of Britain, in accordance with the global strategy of the Muslim Brotherhood and their allies to take over the west.”

Phillips’s spelling and grammar may be better, but in other respects it is difficult to distinguish the views expressed here from the hate-filled comments posted by BNP supporters and other racists on the Mail‘s website. No doubt Gilligan is well pleased to receive the endorsement of such a frothing-at-the-mouth anti-Muslim bigot. Phillips’s article certainly provides a useful illustration of the narrative that Gilligan’s malicious witch-hunting of the IFE and Lutfur Rahman has played to.