At the beginning of February a coalition of more than 50 Muslim, human rights and faith organisations sent a letter to House Speaker John Boehner and Minority Leader Nancy Pelosi objecting to the planned hearings on the “radicalization” of American Muslims initiated by Peter King, chairman of the Homeland Security Committee.

Arguing that “singling out a group of Americans for government scrutiny based on their faith is divisive and wrong”, the coalition urged: “If Chairman King wishes to address violent extremism, then we hope you will ensure that he examines violence motivated by extremist beliefs, in all its forms, in a full, fair and objective way.”

King’s response to the proposal was: “I totally reject that. That, to me, is political correctness at its worst. If we included these other violent events in the hearings, we’d be sending the false signal that we think there’s a security threat equivalency between Al Qaeda and the neo-Nazi movement, or Al Qaeda and gun groups. There is none…. I’m not going to dilute the hearings by including other extremists.”

However, over at The Plum Line, Greg Sargent draws our attention to a new poll by the Public Religion Research Institute which reveals that, while a majority of Americans think that King’s hearings are a good idea, an even larger majority agrees with the coalition’s proposal that the hearings should not single out Muslims. 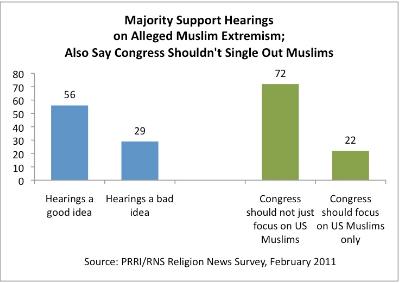 It’s not all good news, though. As Sargent points out, 46% of respondents agreed that US Muslims have not done enough to combat extremism within their own communities, which is one of the assumptions underpinning King’s initiative. Sargent summarises:

“While a huge majority rejects King’s insistence on focusing the hearings just on Muslims, the public just might receptive to their obvious, if implicit, intent: To put you on notice that ordinary Muslims in your midst just might be looking the other way while evil ones are plotting to kill you.”

Now, where do you suppose non-Muslim Americans might have acquired this distorted view of their Muslim neighbours? The Public Religion Research Institute reports:

“The survey findings also show a significant correlation between trust in Fox News and negative attitudes about Muslims. Americans who most trust Fox News are more likely to believe that Muslims want to establish Shari’a law, have not done enough to oppose extremism, and believe investigating Muslim extremism is a good idea.”