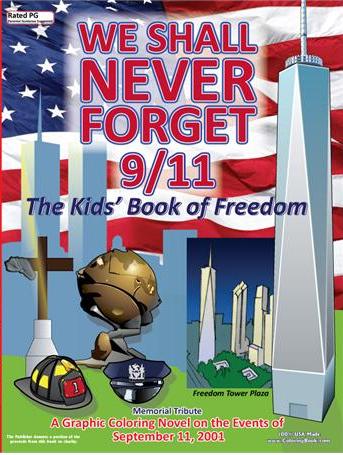 Believing that the upcoming 10th anniversary of Sept. 11 is best memorialized in crayon, Really Big Coloring Books, Inc. is publishing a new coloring book entitled “We Shall Never Forget 9/11: The Kids’ Book of Freedom“.

In offering kids the option of coloring the Twin Towers burning, mourning survivors, or the Navy SEALs shooting Osama Bin Laden, publisher Wayne Bell insists that “the doodles represent patriotism”, a “simplistic, honest tool” to “help educate children on events on 9/11”. But many Muslims describe it as, in a word, “disgusting”.

Pointing out that Muslims are already dealing with an environment of increasing Islamophobia, Michigan Council on American Islamic Relations representative Dawud Walid noted that “nearly all of the mentions of Muslims in the book are accompanied by the words ‘terrorist’ or ‘extremist’.” Indeed, the page depicting a Navy SEAL aiming at bin Laden cowering behind his veiled wife reads “Children, the truth is, these terrorist acts were done by freedom-hating Islamic Muslim extremists. These crazy people hate the American way of life because we are FREE and our society is FREE.” Bell’s response? “The truth is the truth“:

“Little kids who pick up this book can have their perceptions colored by those images … it instills bias in young minds,” said Walid. He says that some of the narrative and photos aren’t even correct, noting that Bin Laden wasn’t hiding behind a wife when he was shot.

Bell stood by the book as an “honest depiction”.

“The truth is the truth,” Bell said, adding, “It’s unfortunate that they were all Muslim and that’s the part people want to erase … I don’t know what else you can call them.”

Noting that one page depicts a woman mourning with a cross chain dangling from her neck, Walid says “Muslim mothers lost sons too”. He also noted that he’s not an advocate of showing children violent images – a sentiment that many military families share. Shariah Gibbs, a military spouse in Germany, said, “This should not be a coloring book.” Another said, “I would not buy a coloring book [about 9/11] … To me, coloring books should be fun … this is not!”

Meanwhile Insted has compiled a useful list for teachers and youth workers of 20 websites in the UK and the United States which contain materials, ideas and guidance for teaching and talking about 9/11.