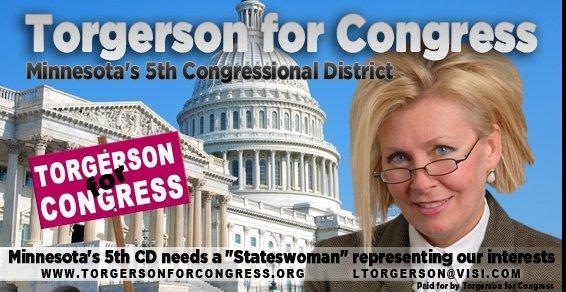 Over at The American Muslim Sheila Musaji exposes the hate campaign being waged by Minneapolis attorney Lynne Torgerson, who is standing against incumbent Keith Ellison, the first Muslim to be elected to the US Congress, in next year’s congressional elections.

“The Quran actually teaches Muslims to kill people not of their faith, which are labeled infidels, which includes Christians and Jews, as well as people of other faiths…. Further, evidently, the goal of Islam is to Islamize the entire world, or, global Islam. I believe there is a term, ‘umrah’ [sic] that reflects this goal…. Islam also oppresses women.”

Torgerson asks “what do I know of Islam?” (A good question, you might think.) She answers: “Well, I know of 911. Nineteen (19) men from Saudi Arabia, all Muslim, hi-jacked planes, and flew into the two (2) World Trade Towers murdering thousands of people, and tried to fly into our Pentagon, and some believe they also tried to fly an airplane into our White House. From this, what I perceive is Islam conducting an act of war against my country….

“What else have I heard about Muslims? Fort Hood. What was the result of the teachings of Islam on a Muslim, who was an officer in the United States’ military? Well, the result was him killing, I believe, 13 American soldiers, and injuring many others. Not one person killed or injured was a Muslim. In another book I am currently reading, entitled Muslim Mafia, it is suggested that Muslims want to infiltrate our police departments, our governments, etc., with the goal of Islamizing America….

“And who does all of this bring us to? Keith Ellison. Who is Keith Ellison? He is my opposing candidate for the Fifth Congressional District seat. Keith Ellison is a Muslim….”