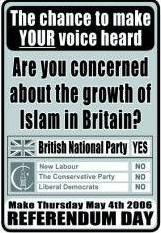 Inayat Bunglawala of the Muslim Council of Britain analyses the BNP’s anti-Muslim campaign:

“Carefully hidden – from public view at least – is the old-style racism of the past. Gone is the continual blaming of the ‘coloureds’ for all the ills of our society. Behind the smiling mask and the sharper suits, however, the British National party is out vigorously peddling the same combustible mixture of half-truths, exaggerations and outright lies, but this time with one crucial difference.

“Since Nick Griffin took over the party leadership in autumn 1999, the remodelled BNP has energetically focused on promoting a new and more voter friendly one-line answer to all problems: it’s all the Muslims’ fault. Following on from its shameless attempt to exploit the tensions caused by the 7/7 bombings in London, the BNP has been trumpeting tomorrow’s May 4 local elections as a ‘referendum on Islam’. Griffin’s choice of Islam as a target for focusing hatred reveals how he has correctly sensed that stoking up anti-Muslim sentiment has now become more socially respectable in Britain – as also in much of Europe – than other forms of xenophobia….

“The BNP has not exactly been hindered in its anti-Muslim campaign by our tabloid papers with their regular diet of hysterical stories claiming that our national culture is under threat from minorities. Richard Desmond’s Daily Express and Daily Star titles have been particularly nasty in this regard…. A vocal band of pro-Israel commentators – led by Melanie Phillips, whose rants are routinely published in the Daily Mail – has also decided to zero in on British Muslims as constituting a mortal threat to civilisation as we know it….

“Even if the polls have overstated the support for the BNP, current trends right across Europe would seem to indicate that the BNP’s anti-Muslim campaign is here to stay for the foreseeable future.”