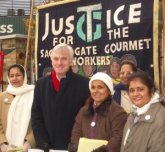 “If anyone doubted that Islamophobia existed in our country they should be in no doubt after reading and listening to the torrent of bigotry and prejudice pouring out of some of our national press and from our main media outlets over the last 48 hours….

“We are clearly in the middle of one of those regular episodes, launched by the unsavoury alliance of media and politicians, of attacking the latest vulnerable minority.

“The historical parallels with the persecution of the Catholic minority in this country three centuries ago and the Jews even further back in our history are striking.

“This week saw the commemoration of the ‘Battle of Cable Street’, when socialists, trade unionists and people of good faith stood up to the emerging Nazi threat in this country and stood in solidarity with the Jewish community against the despicable attacks on it by Mosley’s fascists.

“It is now our time to stand up in solidarity with Muslim members of our community.”