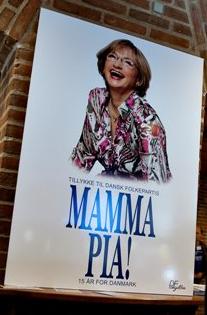 Benny Andersson and Björn Ulvaeus, the Abba stars behind the hit musical Mamma Mia have instructed their lawyers to contact the Danish People’s Party after the far-right party used and changed one of their songs to honour its leader.

Andersson, who last year donated a million kronor ($145,694) to aid the EU election campaign of Sweden’s Feminist Initiative, has reacted angrily to the Danish anti-immigrant party taking liberties with his copyrighted material, reported news agency TT Spectra. “They can bugger off,” Andersson told the agency.

Björn and Benny’s hit song Mamma Mia is the source of their anger after it given a revamp by the Danish People’s Party youth league in honour of the party leader, Pia Kjærsgaard. The young nationalists amended the text to “Mamma Pia” and gave the leader a rousing rendition at the party congress, but declined to seek the permission of the Swedes first.

“Firstly, you can not just re-write songs as you like and secondly we want them to understand that we have absolutely no interest in supporting their party,” said Benny Andersson.