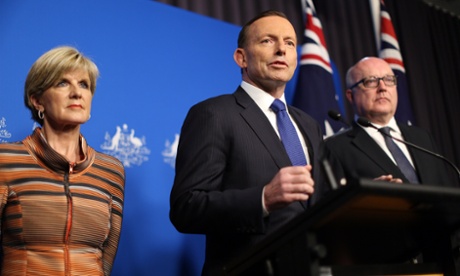 Tony Abbott has defended the need to force people returning from declared conflict zones to prove they were there for legitimate purposes, saying Australian-born fighters were “exultantly holding up the severed heads of surrendering members of the Iraqi security forces”.

The prime minister intensified his rhetoric over planned national security reforms on Wednesday, as some members of the Islamic community warned of the potential for a “witchhunt” against Muslims and of the practical difficulties flowing from the effective reversal of the onus of proof.

Labor remains in a holding pattern, reluctant to express a clear position before a government briefing expected to occur within the next few days, although the shadow attorney general, Mark Dreyfus, said the new criminal offence of travelling to a designated area without a legitimate purpose rang “alarm bells”.

The Greens argued the government was “trashing long-established legal norms”.

There remains uncertainty over elements of the government’s planned reforms, including the range of customer information that internet service providers would be be forced to store under a mandatory data retention scheme. The human rights commissioner, Tim Wilson, handpicked by the federal government to defend freedom, said the proposed data retention scheme was “a very serious threat to privacy”.

Abbott announced on Tuesday his plans to broaden the listing criteria for terrorist organisations, lower the threshold for arrest without warrant for terrorism offences, extend police and intelligence agencies’ powers to stop, question and detain suspects, and make it easier for the Australian federal police (AFP) to seek control orders on returning foreign fighters.

The foreign affairs minister, Julie Bishop, would be able to designate an area where terrorist organisations were conducting hostile activities, such as parts of Iraq and Syria, and it would become an offence to travel to those areas “unless there is a legitimate purpose”.

In a radio interview on Wednesday, Abbott played down suggestions forcing people to prove a legitimate purpose was effectively a reversal of the presumption of innocence.

“Well no, I’d rather say that it’s more the creation of a new offence – the offence of travelling to a place which is well known to be a hotbed of terrorist activity without a legitimate reason,” Abbott told the ABC. “Let’s face it, why would someone who doesn’t have family or humanitarian reasons want to go to Mosul, for instance? I mean, why would they?”

Abbott later told reporters in Canberra of the need for action “when you’ve got people born in Australia, educated in Australia, going overseas and exultantly holding up the severed heads of surrendering members of the Iraqi security forces”.

“Obviously these are people who we wouldn’t want to allow back into our country unsupervised and there are up to 150 Australians who’ve gone to Syria and Iraq to engage in terrorist activities and we need these stronger powers to keep our community safe,” Abbott said.

Keysar Trad, spokesman for the Islamic Friendship Association of Australia, welcomed Abbott’s decision to abandon proposed changes to water down the Racial Discrimination Act, but said that gesture did not mean the government had made the separate case for expansion of security agency powers.

Trad said one of the best ways to counter terrorism was to engage in broad consultation with communities, and improve access to health and education, particularly tertiary education.

He said Islamic community leaders in Australia had been strongly pushing the message that people should not go to join the fighting in Syria and Iraq. “We’ve been working very hard to do that and there is one more step that we need to do to make sure there is no appeal to that group amongst young people here, that would not cost the government more than a couple of meetings involving a larger number of community leaders,” Trad said.

He raised concern over how people would provide evidence they had visited declared areas for legitimate purposes, such as to help care for a sick relative, and asked how they would prove that they had spent their entire time in the region for that purpose.

Concetta Fierravanti-Wells, the parliamentary secretary to the minister for social services, said said she had been involved in discussions with Islamic communities and the government would conduct further consultations over the security proposals. Fierravanti-Wells told Guardian Australia it was important not to allow “the contribution of so many to be overshadowed by negativity about just a few”.

“I think it’s going to be important that we work through these issues together in a constructive and reasoned manner, taking into account the sensitivities that this may give rise to,” she said. “I think that clearly for reasons of national security in the end if people are doing no wrong they should not have any fear and that has always been a consistent message that I’ve put and in the end we are one of the most socially cohesive nations on Earth.”

Fierravanti-Wells said she was pleased the prime minister had decided not to pursue the changes to the Racial Discrimination Act as it had become clear “from the outset that this was a matter of concern to quite a number of communities”.

The acting leader of the Greens, Adam Bandt, called on the prime minister to release draft legislation immediately so the details of the counter-terrorism changes could be properly scrutinised. “Tony Abbott’s ‘Team Australia’ deserves to know what his proposed terror laws will mean for our freedoms and the rule of law,” Bandt said.

“Tony Abbott needs to make a convincing case for these changes. Trashing long-established legal norms, like the presumption of innocence, just because Tony Abbott says so isn’t good enough … Making someone ‘guilty until proven innocent’ simply for visiting a particular area seems a step too far, especially while detail on this legislation is lacking. The experience of David Hicks should remind us of the dangers of trashing long-held legal principles.”

The deputy Labor leader, Tanya Plibersek, said as a matter of principle in a democracy there must be proper oversight and checks and balances.