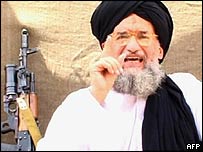 Marc Lynch on the Zawahiri tape, broadcast on Al-Jazeera. Once again Lynch argues that “it’s precisely because Zawahiri’s call for violent, total change represents a minority view that he keeps lashing out against the advocates of peaceful, gradual change”. The latter, of course, being represented by figures such as Yusuf al-Qaradawi.