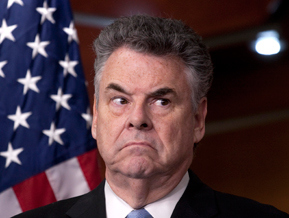 President Obama cautioned the nation not to rush to judgment about the Boston Marathon bombers. But that’s not stopping Republican Rep. Peter King.

King, who chairs the House subcommittee on Counterterrorism and Intelligence, is urging authorities to beef up their surveillance of Muslims in the U.S.  following Friday night’s arrest of bombing suspect Dzhokhar Tsarnaev.

Police must “realize that the threat is coming from the Muslim community and increase surveillance there,” the New York lawmaker told National Review.

King – who spearheaded controversial hearings on the radicalization of Muslim-Americans in 2011 – also told CNN that “we can’t be politically correct. I think we have to see, has radicalization extended into the Chechen community?”

King is not the only Republican employing arguably Islamaphobic rhetoric this week. South Carolina’s Republican Sen. Lindsey Graham said on Saturday that the Tsarnaev brothers were on a “jihad mission.”

“Radical jihadists are trying to attack us here at home,” the South Carolina Republican told Fox News. “Every day we face threats from radical Islamists and they are coming through our back yard and trying to radicalize American citizens.”

Meanwhile, Graham, King, and GOP Sens. John McCain of Arizona and Kelly Ayotte of New Hampshire have issued a joint statement urging President Obama to treat Dzhokhar as an “enemy combatant” so he can be held and questioned instead of being tried in a criminal court.

The GOP senators argued that a criminal trial would slow down the effort to extract information from Dzhokhar.

“Let me be very clear,” West wrote, “the terrorist attack in Boston and evolving events indicate we have a domestic radical Islamic terror problem in America. We must no longer allow the disciples of political correctness and the acolytes of the Muslim Brotherhood (CAIR, ISNA, MPAC, MAS) to preach to us some misconceived definition of tolerance and subservience. When tolerance becomes a one way street it leads to cultural suicide…. When Rep Peter King attempted to have hearings on domestic terrorism he was attacked for being racist. No more excuses. No more apologies. We are in a war of ideological wills, and we shall prevail.”