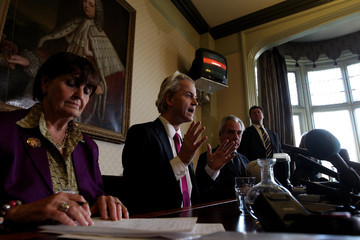 Stoning, whipping and amputations could become common punishments in the UK if hardline Sharia law is allowed to thrive, a peer has warned.

Crossbencher Baroness Cox claimed a rise in the number of British Muslims using it instead of the official court system could even lead to the destruction of democracy.

She said Sharia law will become a way of life in parts of the UK, sparking support for the BNP, unless officials step in.

UK Muslims have been able to use Sharia for legal disputes since 1982.

The baroness said: “We do not at the moment have the most brutal punishments, but there are those who would like to bring them in.”

This is of course music to the ears of the English Defence League:

It is not the first time that the EDL have expressed their solidarity with Caroline Cox. Two years ago Cox and Lord Pearson hosted Dutch far-right Islamophobe Geert Wilders at the House of Lords while the EDL demonstrated in support outside.

Update:  The Daily Mail has also reported Cox’s statements (“‘Stoning and whipping will happen in the UK if we allow sharia law to thrive’, warns peer”). It quotes Cox as saying: “Many Sharia courts are an institutional means of intimidation backed by death threats.”

Update 2:  I just checked and, yes, Baroness Cox is still listed as a “prominent supporter” of One Law For All.