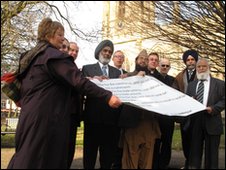 The Right Reverend Gordon Mursell, The Church of England Bishop of Stafford, said: “If Stoke-on-Trent is to have a good future, it is absolutely vital that all its citizens, irrespective of creed and background, work together for the common good. We believe that real diversity actually helps create a vibrant and attractive city. The EDL and BNP think the opposite. That is why we oppose them.”

The Right Reverend David McGough, the Roman Catholic Auxiliary Bishop for North Staffordshire, added: “We must all oppose any extremism that would play on peoples’ fears and anxieties to divide our city and set one section of our community against another.”

Gurmeet Singh Kallar, of the Sikh Gurdwarar, said: “As Sikhs we believe that all people are important to God and we are against the persecution of any group or minority.”