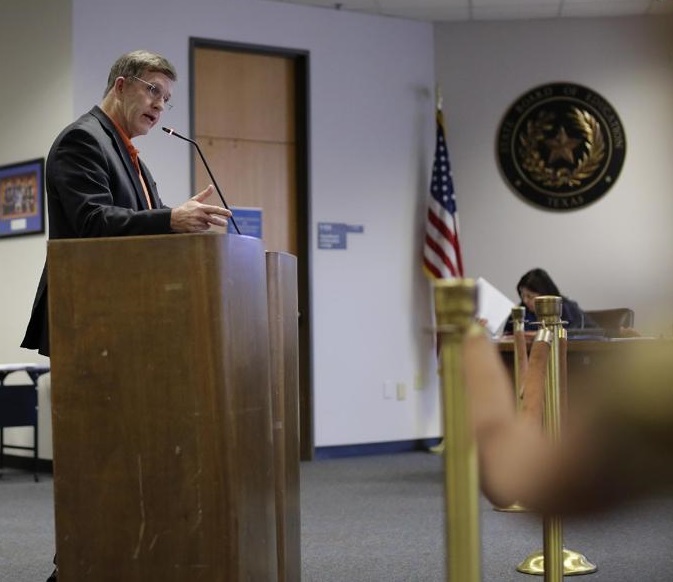 The Texas Board of Education couldn’t muster the votes late Tuesday to grant preliminary approval for new history and social studies textbooks for classrooms across the nation’s second-largest state, failing to act amid stinging criticism of the proposed books from both the right and left.

Academics and some liberal-leaning activists have complained for months that many of the books up for adoption overstate the influence of religion on early American democracy, including exaggerating biblical figure Moses’ importance to the founding fathers. But conservative groups worry that many of the same books promote pro-Islam values.

The Republican-controlled board tried to pass nearly all of the 100 books and lesson software it was considering, but that failed 5-4 with four abstentions. One member wasn’t present. “The abstentions have it,” joked Thomas Ratliff, a Mount Pleasant Republican.

That sets up a potentially tense final vote Friday, when the board will have to approve the books or miss the deadline to get them to the state’s 5 million-plus public school students by September 2015. Texas is such a vast textbook market that much of what is produced here can end up influencing materials used in other states.

Board members stressed that they still have time to successfully pass books – but also conceded that no one expected Tuesday to end with no action taken.

The failing vote came after hours of public testimony, where the board heard many of the same complaints about the books that it has for months – that the texts present political and religious beliefs and ideologies as facts.

Retired school teacher Anthony Bruner warned that they would indoctrinate students with communist tenants. “I’ve tried to be a good, patriotic citizen and tried to protect the young people,” said Bruner, who is aligned with a conservative group called Truth in Texas Textbooks.

That organization used dozens of volunteers to raise more than 1,500 complaints about the books. It noted that the achievements of President Ronald Reagan were omitted from some while arguing that others ignored Islam’s occasional glorification of violence – including beheadings.

Roy White [pictured], a retired Air Force pilot and Truth in Texas Textbooks’ chairman, said he supports all religions but “the political side of Islam, the part that threatens you and me … that’s not a religion.”

Meanwhile, university professors commissioned by a left-leaning advocacy group raised concerns about Moses playing too prominent a role in the books. But that made some on the board bristle. “Most people have been disturbed by the fact that we give any credit or credence to Moses at all,” said Pat Hardy, a Republican from Weatherford. “I do think it has a place.”

Since September, publishers have had a chance to edit their prosed books – or provide justifications for why they aren’t – in response to previously raised complaints.

One said it is willing to remove a cartoon in a high school American government textbook that featured space aliens hovering over earth with the caption, “Relax, we’ll be fine – they’ve got affirmative action.” But the same company refused to modify a Contemporary World Cultures book stating that jihad is “the struggle to be a better person,” even though some critics said it actually means holy war.

Textbooks for Texas can affect books sold in other states – but that influence may be waning. Since 2011, its school districts have been allowed to buy textbooks with or without board approval, and the use of iPads and e-readers has made it easier for publishers to tailor books to individual needs of any state.