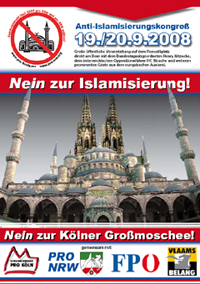 A German far right group has stirred Muslim anger worldwide by holding a three-day “Anti-Islamisation Conference” to protest against the construction of mosques and Muslim immigration.

Prominent members of Europe’s far right, including French “Front National” leader Jean-Marie le Pen and Belgian far-right politician Filip Dewinter, have said they will attend the meeting in Cologne which is aimed at forging a European alliance against “Islamisation.”

The conference will include a rally in the centre of Cologne tomorrow which police say could lead to clashes with left-wing groups that plan a counter-demonstration. Trade unions, churches and other groups have also announced plans to protest against the conference.

The conference organiser is a local protest group called “Pro-Cologne” which campaigned against the city’s recent decision to allow the construction of a large new mosque with two 55-metre tall minarets. Around 330,000 immigrants live in Cologne, about a third of the city’s population.

Mosques are shooting out of the ground like mushrooms, the muezzin call and headscarves are flooding our streets,” Pro-Cologne said on its website. It said 150 “politicians and publicists” from all over Europe and 1,500 other participants will attend the conference at which it plans to launch a petition “against the Islamisation of our cities”.

The meeting has drawn fierce criticism from German politicians and city leaders in Cologne. The premier of the state of North Rhine-Westphalia, Juergen Ruettgers, said: “Those who abuse the cosmopolitan and democratic city of Cologne as a meeting place for right-wing radicals are against tolerance, against reconciliation, against humanity.”