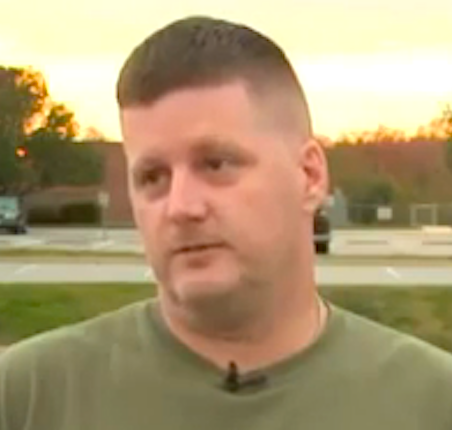 A Maryland family apparently plans to sue their daughter’s high school over an assignment that included lessons on the Muslim religion.

John Kevin Wood was banned last month from La Plata High School when school officials claimed he threatened to cause a “sh*tstorm” and disrupt classes over the world history lesson.

School officials considered the comments to be a threat against public safety, but the U.S. Marine veteran’s wife and attorneys insist he did nothing wrong.

“The school’s actions not only dishonored John Wood’s service, but the service of all men and women in our Armed Forces who defended our nation from Islamic violence,” said the conservative Christian Thomas More Law Center in a statement.

The family and their lawyers claim the girl was required to affirm “there is no god but Allah” and other aspects of the Muslim faith, but school officials say the class covered only the role of Islam in the history and politics of the Middle East – where it has been the dominant religion for centuries.

Wood and his attorneys claim the lesson amounted to “Islamic indoctrination” and violated the constitutional rights of Christians who are not able to proselytize at school.

According to a press release from the self-described “Christian response to the ACLU,” the Wood family objected to lessons that indicated Allah is the same god worshiped by Christians and Jews. They also were offended that lessons covered Muslim teachings about the role of women in Islamic societies.

“Wood witnessed firsthand the destruction caused in the name of Allah and knows Islam is not ‘a religion of peace,’” the law center said in a statement. “He served in Operation Desert Shield/Desert Storm, and lost friends in that action. On 9-11, Wood responded as a firefighter to the smoldering Pentagon.”

Wood demanded another assignment for his daughter, but school officials refused and told the family the teen risked failing grades if she did not complete the lesson. The high school junior did not turn in the assignment, and she received a zero.

“True to his Marine training, John Wood stood his ground,” his attorneys said in a statement. “He did not retreat. Yes, his daughter has received a failing grade in her World History Class. But the story is not yet over.”