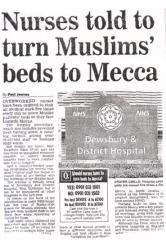 A hospital in northern England is playing down media reports saying that nurses have been ordered to stop normal duties five times a day to turn Muslim patients’ beds so that they face Mecca.

British tabloid newspapers reported Tuesday that at a hospital in West Yorkshire “overworked” nurses in the taxpayer-funded National Health Service were struggling to cope with the additional duties required for Muslim patients. Apart from moving the beds, the nurses also have to provide bathing water for pre-prayer ablutions, the reports said. The new duties were causing “havoc“, said the Daily Express, while the Daily Star said they were “creating turmoil” and quoted a doctor at the hospital as saying it was a case of “political correctness gone mad“.

In reaction to the media reports, the hospital issued a new statement on Tuesday, calling the coverage “entirely inaccurate”. “Nurses are not being removed from their duties to move patients’ beds towards Mecca,” chief nurse Tracey McErlain-Burns said. “Moving patients’ beds for prayer five times a day has not been suggested as part of this workshop and staff have not been ordered to do this.”

It’s not just the right-wing media who swallow this nonsense. That standard bearer for scientific rationalism Richard Dawkins happily repeats it too: RichardDawkins.net, 4 December 2007

You can read the original Mid Yorkshire Hospitals NHS Trust press release on which the whole fraudulent story was based, and the Trust’s reply to the distorted media coverage, here.