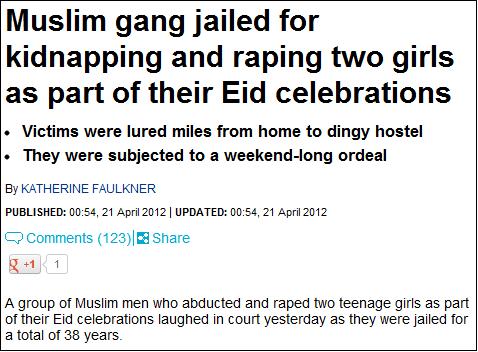 That’s the headline to an article in today’s Daily Mail, reporting on the conviction of a group of men for abducting, assaulting and raping two girls, aged 15 and 16.

The article quotes one of the convicted men as claiming that sex with the two girls was consensual: “It was Eid. We treated them as our guests. OK, so they gave us [sex] but we were buying them food and drink.”

And that single quote is the sole the basis for an inflammatory headline that plays to the poisonous far-right racist myth that Muslims are directed by their faith to sexually molest young girls.

It’s worth noting that the report is written by Katherine Faulkner, who last year co-authored the equally irresponsible and misleading report of a drunken assault in Leicester, which led to an EDL protest against so-called “anti-white racism” in the town.

It is no accident that the Mail was one of Anders Breivik’s favourite English-language newspapers. It is cited numerous times in the manifesto he published to justify his terrorist killings and an article by Melanie Phillips is reproduced in its entirety.