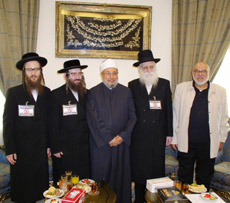 The television network al-Jazeera has been criticised by MPs for broadcasting the sermons of a Muslim cleric in which he celebrates the Holocaust and prays for the killing of all Jews.

John Whittingdale, chairman of the House of Commons Media Select Committee, urged al-Jazeera yesterday to apologise for broadcasting the messages of Yusuf al-Qaradawi and to ban the cleric, one of the network’s top hosts, from appearing on screen. “I would hope that anybody who watches it or is aware of it may change their attitude towards al-Jazeera,” he told The Times. “I would’ve thought it is very damaging. Al-Jazeera should apologise.”

Andrew Dismore, the Labour MP for Hendon, condemned al-Jazeera for associating itself with Sheikh al-Qaradawi – who hosts one of its most popular segments, Shariah and Life – saying the network should not use live coverage as a means of justifying the broadcast of the sheik’s comments. “If they put on somebody who has known racist views they should not be surprised what comes out at the other end,” he said.

The Board of Deputies of British Jews said: “These sermons represent hatred in its purest form and epitomise the worst of Islamist anti-Semitism.” The complaints relate to a sermon and a lecture by Sheikh al-Qaradawi in which he described the Holocaust as a “divine punishment” and prayed to Allah to kill Jews “down to the very last one”.

And what is the source for this latest attack on Qaradawi? Yes, you probably guessed, it’s another cut-and-paste job by the Middle East Media Research Institute. For Qaradawi’s actual views on the Jewish community, see for example here and here.

Update:  Needless to say, MEMRI’s attack on Qaradawi has been endorsed by Harry’s Place, a self-proclaimed “left-wing” blog with a close affinity for extreme right-wing Zionists. However, not all of Harry’s Place readers buy this. We reproduce the following post from the comments section:

I don’t think the issue is as clear-cut as you say, because Qaradawi has made many moderate, pluralistic statements that show a tremendous desire for peaceful coexistence of the three Abrahamic faiths.

For example, he has opposed the idea of Muslim supremacy over other religions:

“The Koran states that [religious] disagreement exists because God [himself] wills it … that people will have different religions. After all, if God had wanted everyone to have the same religion and the same path, he would have created Man differently … the [believing Muslim] does not try to pass judgment upon those who disagree [with his religion] in this world. God is the one who will pass judgment on the day of resurrection…”

He highlights the universalist and progressive message of Mohammed that all are equal in the eyes of God:

Islam honors Man as such, regardless of gender, religion, color, language, geographic region, or status … [People] said to God’s Messenger: ‘This is the funeral of a Jew. That coffin belongs to a Jew, not a Muslim.’ He answered: ‘Is this not a soul [too]? Is the Jew not a human soul?’

Perhaps what infuriates some Western opinion about Qaradawi is that he pins the blame for modern anti-Semitism where it belongs – on Europe’s long history of intolerance:

“We did not invent this hostility [towards the Jews]. Jews lived among Muslims for centuries, even when Europe persecuted them and expelled them… They found a safe haven in Muslim territory and Muslim homelands. This is because Islam considers the Jews to be People of the Book … This is how the Koran views the Jews, and this is how they lived in the countries of the Muslims. They have the protection [dhimma] of Allah, His Messenger, and of all the Muslims.”

Relationships between Muslims and Jews have been poisoned by Zionism and the criminal occupation of Muslim lands:

“The battle between us and the Jews began when they occupied the land of Palestine, expelled its residents, and perpetrated all their deeds. They are the ones who started the hostility, not us… There is a difference between Judaism as a religion and Zionism as a political movement with aspirations and goals.”

Qaradawi does something that Western Islamophobes often claim is never done amongst Islamic scholars – he historically contextualizes the controversial parts of the Koran which it is claimed make Islam a violent religion:

“This verse [Koran 5:82] talks about an historical position. Islam accepted the Jews with open arms and welcomed [the Muslims’] relations with them, since they are People of the Book … Here [in the verse], Islam is talking about those that did this [i.e. who violated the pact with Muhammad]. However, Islam welcomes those who believe in the [Jewish] religion. Moreover, the Jews are probably the closest to Muslims in terms of faith and law, even more than Christians.”

Qaradawi argues that minorities would have nothing to fear in a Muslim-majority state:

“Respect for the dictations of [other] religions and faiths is one of the most fundamental things for us. We don’t get involved in their affairs… Islam is at the top of the tolerance scale; it allows one to do what is forbidden to Muslims, if it is permitted [in one’s owns religion], such as eating pork and drinking wine… Protecting the ahl al-dhimma is a duty incumbent upon the Muslims. They must protect them before they protect Muslims. Muslim clerics have said that harming a dhimmi is worse than harming a Muslim. Slandering a dhimmi is worse than slandering a Muslim, since he is considered to be under the Muslims’ charge.”

Now, I understand that you may not like the man. Certainly he has said some pretty objectionable things about the Holocaust. But you must recognise him as a moderating influence with many good and progressive things to say about the possibility of peaceful coexistence between the West and the Muslim world. That is why he was invited to London by the far-seeing Ken Livingstone, and why we must listen to him today, with politeness and genuine good will, understanding that sometimes the kernel of truth that he states can be temporarily obscured, alas, by the shell of bitterness and resentment at the hideous oppression of his people by Israel and the West.