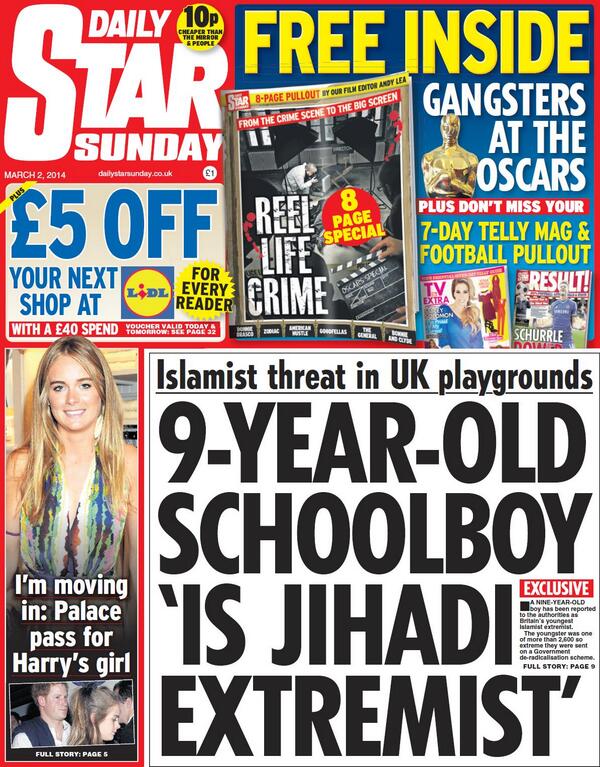 The source of the headline is in fact a recent report by CAGE, The Prevent Strategy: A Cradle to Grave Police-State, which condemns the targeting of Muslim children as potential extremists under the Channel programme.

The CAGE report states: “The ambiguous deﬁnitions and loose understanding of Islamic political causes has inevitably led more people to be viewed with suspicion. Muslims are being referred simply due to their religious or political views that pose no danger to society. There have been a number of cases of Muslim school children being reported simply for making innocent or unprovocative comments after hearing TV news regarding the Muslim world.”

The report adds: “A nine-year-old schoolboy in east London, who was referred to the authorities after allegedly showing signs of extremism – the youngest case known in Britain. He was ‘deprogrammed’ according to a source with knowledge of the case.”

The Daily Star Sunday front page spins this to suggest to its readers that Muslim children pose a genuine extremist threat. The accompanying text states: “A nine-year-old boy has been reported to the authorities as Britain’s youngest Islamist extremist. The youngster was one of more than 2,600 so extreme they were sent on a Government de-radicalisation scheme.”

The “full story” inside the paper does say that CAGE claims its findings “are part of the ‘criminalisation’ of the Muslim community in the UK and have led to Britain becoming a ‘Security state’ for followers of Islam”. But that hardly serves as an adequate balance to the screaming front-page headline.