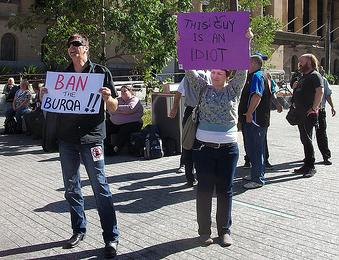 Following on from the Australian Defence League’s flop in Sydney last weekend, another “ban the burqa” protest was held yesterday in Brisbane.

Organised by the Australian Patriots Defence Movement, an organisation that claims affiliation to the EDL and was launched following the broadcast of the TV documentary The Great Divide, the demonstration managed to attract 20 supporters, who were heavily outnumbered by counter-protestors.

Update:  Apparently undeterred by the minimal support for Saturday’s protest, the APDM intend to hold a further “ban the burqa” demonstration in Brisbane on 27 August.