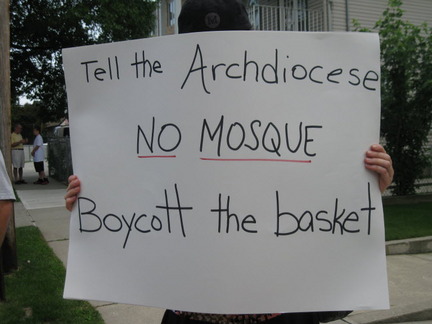 Midland Beach residents opposed to the sale of the empty convent of St. Margaret Mary parish to a Muslim group rallied yesterday afternoon for the second straight Sunday in front of the 2½ -story building, and this time other Staten Islanders joined them, carrying their own protest signs.

“I’m here to support this community because of how frightened everyone is of this group coming in to the neighborhood – the terrorism factor is a big part of it,” said Suzanne Adamo of Castleton Corners, who was born and raised in Midland Beach. She was referring to the Muslim American Society, a national organization whose Brooklyn/Staten Island chapter signed a contract last month with Rev. Keith Fennessy, the parish pastor, to purchase the convent.

One sign on bright yellow cardboard read in black capital letters: “Muslim Brotherhood You Are Not Welcome Here.” A major issue that has energized opponents of the convent-to-mosque conversion is the alleged links of MAS founders to Egypt’s Muslim Brotherhood, and the belief of many neighborhood residents that the Muslim Brotherhood is itself a terrorist organization.

The U.S. State Department maintains a publicly available list of foreign terrorist organizations. The most current list, dated January 2010, includes the names of 45 groups from around the globe. The Muslim Brotherhood is not on the list.

“I’m very against the way this sale went through – it was deceitful and sinful,” said Carolyn Pinto of New Dorp, who attended St. Margaret Mary elementary school. “This is a Christian community.” Native Islander Christine Marra of Grant City said she was “opposed to the sale of the convent to a non-Christian organization,” and held a hand-written sign that read “Tell the Archdiocese No Mosque. Boycott the Basket.”

Unlike the first rally last Sunday, yesterday’s included a uniformed police presence, and officers restricted protestors to the sidewalk after many spilled out onto Greeley Avenue, raising signs and cheering when drivers of passing vehicles slowed down and honked horns in support.

The rally, with about 175 people at its height, was periodically interrupted by a lone counter-demonstrator standing across the street from the convent. His shouts were ignored by the vociferous yet peaceful crowd. It concluded at 1:30 p.m., with the crowd chanting “USA! USA!” as they dispersed.