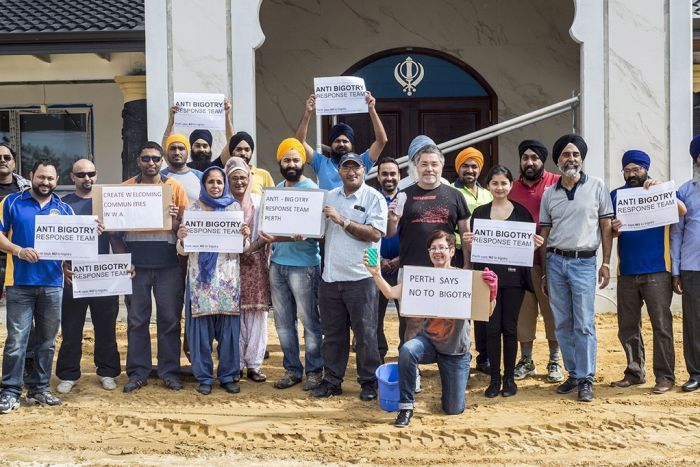 A group of volunteers has come together to support Perth’s Muslim community after a spate of recent graffiti attacks on places of worship.

The Anti-Bigotry Response Team has gathered outside a Sikh Temple that was mistaken for a mosque and spray painted with anti-Muslim messages three weeks ago.

That incident followed incidents at two Perth mosques and an Islamic school which were painted with slogans including “ban Islam”.

The group’s Victoria Martin-Iverson said they would be on stand-by to respond to any future attacks.

“What we want to do is show members of ethnic and religious minorities that not everyone in the Australian community is bigoted and that there is a group of concerned citizens that welcomes Muslims, Sikhs … a multiplicity of religious and ethnic communities, we celebrate the diversity that immigration brings,” she said.

Ms Martin-Iverson said members of the Muslim and Christian communities had worked together with members of the Sikh community to remove the racist graffiti.

“We are quite connected now through the different religious communities and we’ve let them know we are more than happy to come out and roll up our sleeves, get a bit wet, get a bit grubby and make sure that members of our community understand that we are there with them and we will help,” she said.