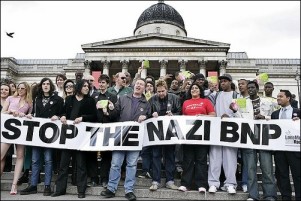 Anti-fascist campaigners and trade unionists called on the people of east London to mobilise against the racist British National Party’s (BNP) plans to hold a public demonstration in Dagenham on Saturday. Organised by Unite Against Facism (UAF), trade unionists, anti-fascists and anti-racist groups will assemble at 1pm at the Civic Centre in Dagenham.

In May this year, the BNP gained 12 seats on the Barking and Dagenham Council. It has whipped up racist lies against black, ethnic minority and immigrant communities in the area. This includes pushing the false claim that the area’s housing shortage is the fault of the local black community. In the last five years since the BNP has been targeting the borough, racist attacks have increased against black and ethnic minority people.

Dagenham Labour MP Jon Cruddas warned that the BNP was “seeking to divide us and we should resist them by joining together against a party based upon fascism and racism. I believe this counter-mobilisation is very important to show we represent the majority – our multicultural and multifaith society.”

University College Union (UCU) joint general secretary Paul Mackney vowed that his union would fight the BNP across Britain’s colleges and universities. “It is very disturbing to see that they now feel able to parade their racist poison in public spaces. UCU is fully behind this peaceful opposition to the BNP,” the staunch anti-racism campaigner added.