A man is calling for all Bournemouth cafes and takeaways to be obliged to say whether their meat is slaughtered by Muslim rules.

Animal rights campaigner Gary Hazel claimed some of the methods used are “very cruel” and people should be able to make an informed choice.

Jewish and Muslim communities are exempt from a law that requires animals to be stunned before their throats are cut. The RSPCA said that Muslim interpretations differ and sometimes the animals are stunned and sometimes they are not.

Gary Hazel, 37, a chef and publican from Bournemouth town centre, said: “A lot of people confuse the issue with race and religion. That’s a distraction. For me, it’s animal cruelty, and the way they slaughtered.”

He spoke out after trying eight different cafes on a night out and finding all served Halal meat. He then went on a tour of takeaways between Ashley Cross and Boscombe with a vegan friend and after speaking to the staff said he found 41 out of 45 served Halal meat.

Mr Hazel has written to the council and Bournemouth West MP Conor Burns about the issue. He said: “Bournemouth council could make it a condition of licence that all meat products could be clearly labelled so we could at least make an informed choice about where we spend our money.”

Bournemouth Council said the national law do not oblige takeaways to put up notices saying whether they serve Halal or non Halal meat. The council does have the power to compel those that advertise Halal meat to prove that it is genuine. Sarah Rogers, Senior Licensing Officer, said: “As far as licensing is concerned we are unable to impose conditions on licences regarding the origins of meat.”

Cllr Dave Smith, the cabinet member for communities, whose portfolio covers licensing, said: “This issue is not a priority for the council at the moment. I am sure if customers inquire they would be informed how the meat was prepared.”

The RSPCA briefing on religious slaughter in fact states that 90% of halal meat sold in the UK has been pre-stunned. If Gary Hazel’s motive for this campaign was his concern that ritual slaughter without stunning is cruel – which is itself a matter of debate – then his demand would be for meat to be labelled as not having been pre-stunned, rather than labelled as halal.

It is also notable that anti-halal campaigners like Hazel rarely have anything to say about schechita, the Jewish method of ritual slaughter, which requires that all animals should be killed without stunning. There’s a parallel here with the Islamophobes who bang on about Sharia tribunals constituting a parallel legal system but ignore the existence of Beth Din courts in the Jewish community.

Hazel’s claim that the growing campaign against halal slaughter has nothing to do with race and religion is at best naive. Then again, I wonder if our anti-halal campaigner could be in any way related to this Gary Hazel: 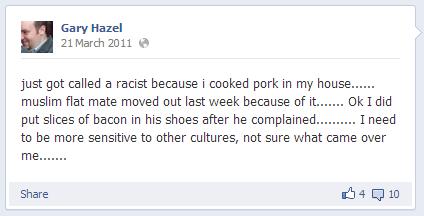