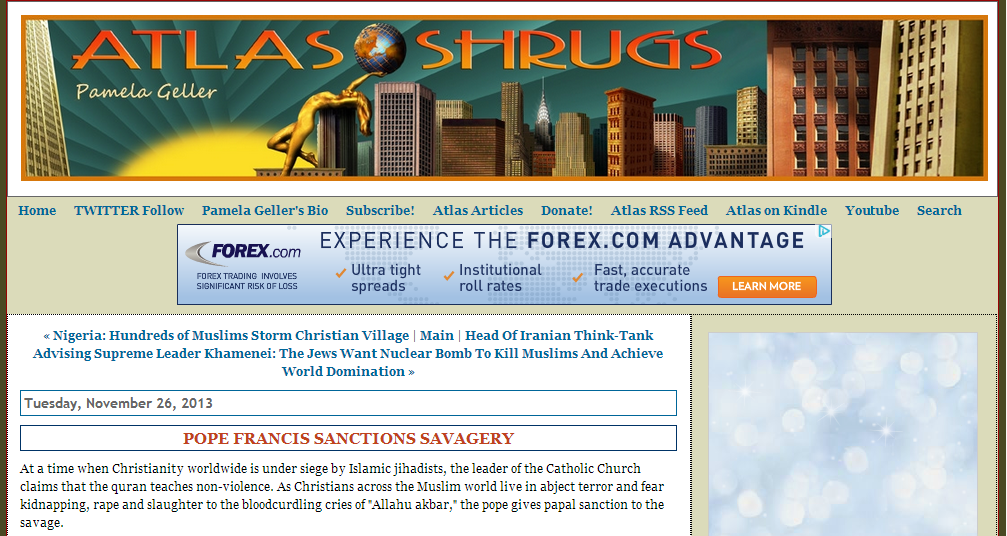 Anti-Islam activist and blogger Pamela Geller lashed out at Pope Francis on Tuesday, claiming he condoned violence against Christians.

“At a time when Christianity worldwide is under siege by Islamic jihadists, the leader of the Catholic Church claims that the quran teaches non-violence. As Christians across the Muslim world live in abject terror and fear kidnapping, rape and slaughter to the bloodcurdling cries of ‘Allahu akbar,’ the pope gives papal sanction to the savage,” she wrote at her blog.

In the apostolic exhortation Evangelii Gaudium, published Tuesday, the pope contrasted “violent fundamentalism” with “authentic Islam.” The latter, he wrote, was “opposed to every form of violence.”

“How does he know that? When did he become an imam?” Geller wrote, citing passages from the Koran.

“Nothing will be gained by this refusal to face reality. Christians will still be slaughtered in the name of Islam and jihad all over the Muslim world. And now the Pope has forbidden Catholics to speak honestly about what is happening and why. It’s a disgrace,” she concluded.

The Southern Poverty Law Center named Geller’s group “Stop Islamization of America” a hate group in 2011. The group was described as a “propaganda powerhouse” for its attacks against the so-called “Ground Zero mosque” in New York City.