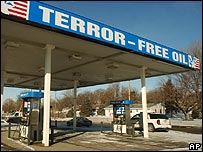 “The BBC reports that an outfit calling itself the ‘Terror Free Oil Initiative’ has set up a filling station in Omaha, Nebraska, touting oil not imported from countries which ‘support terror’ – meaning just about any Muslim country, in the Middle East or anywhere else. At the moment, they only use American and Canadian oil. (Clearly, they’re only talking about one sort of terror.) A few paragraphs into the report and we find out who their spokesman is: Joe Kaufman, the bigot behind ‘Americans Against Hate’, a group which dedicates itself to smearing Muslims and Muslim organisations.”