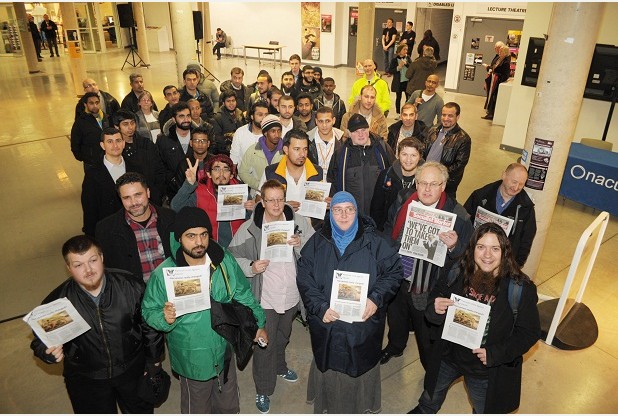 A protest against a speaker specialising in Islamism and counter-extremism has taken place at Plymouth University tonight. Around 30 people gathered to show their anger at Sheikh Dr Usama Husan giving a lecture at the uni. It comes after he failed to condemn an image from the online cartoon “Jesus and Mo” showing Jesus and Mohammed saying “hey” and “how ya doin” to each other.

Dr Hasan is a senior researcher in Islamic Studies at Quilliam was speaking at the Jill Craigie cinema tonight on the topic of Islam and democracy in the wake of the Arab Spring. The University cites Dr Hasan as a trained imam and a scientist with a PhD, MA and MSc from the Universities of Cambridge and London, and a Fellow of the Royal Astronomical Society.

Around 30 people from the university’s Plymouth Islamic Society protested at the event as he had not condemned the actions of Quilliam co-founder Maajid Nawaz, a Lib Dem parliamentary candidate for Hampstead and Kilburn who retweeted the controversial image. They gathered peacefully in the lobby area of the Roland Levinsky building ahead of Dr Hasan’s arrival. A few “boos” were heard as he entered the lectured theatre.

Quilliam says it lobbies government and public institutions for more nuanced policies regarding Islam and the need for greater democracy in the Muslim world.

A spokesman for Plymouth University said it hosted “hundreds” of events each year, attracting “high profile guest speakers” and these events played a key role in “stimulating debate and encouraging individuals to think for themselves, broaden their horizons and make sense of the world in an informed manner.”

The spokesman added: “This does mean that some topics may not be of interest to everyone, suit their tastes, or be in keeping with their ideologies, which is something we understand and respect. We rigorously consider the appropriateness of any event or guest speaker in balancing our obligation to uphold the principles of free speech with our duty of care to students, staff and the community.”

It is true that the Plymouth University demonstration “came after” Usama Hasan failed to condemn Maajid Nawaz’s tweet of a “Jesus and Mo” cartoon. But it is misleading to suggest that this was the sole reason for the protest.

First of all, the objection is not simply to the one cartoon but to the entire “Jesus and Mo” series which, as the online petition against Nawaz points out, “contains many highly offensive images of Jesus and Muhammad including homo-erotic scenes of them in bed together, being at bars together drinking alcohol using foul language, and reading pornographic magazines”. The petition further objects to the swearing and abuse with which Nawaz responded to his critics.

As the Quilliam Foundation NOT welcome in Plymouth Facebook page makes clear, the objection to Usama Hasan’s appearance in Plymouth was also wider than a complaint about a single cartoon. The organisers of the demonstration opposed Quilliam for having promoted the far-right extremists “Tommy Robinson” and Kevin Carroll, and for having “provided lists to the govt of alleged extremist sympathisers which included the Muslim Council of Britain, the Muslim Safety Forum and even the Islam Channel”.

Plymouth University ISoc also condemned a cartoon tweeted by Usama Hasan himself, which trivialised domestic violence. They were joined by Fawcett Plymouth, who wrote to Plymouth University calling for the cancellation of the event at which Hasan was to speak.

The organisers’ appeal for support for the demonstration concluded: “We do not want the QF in Plymouth, they are a danger to community cohesion and peaceful relationships that exist here between the mainstream Muslim as well as diverse communities.”

Update:  Maajid Nawaz, however, evidently endorses the view that Plymouth ISoc are “Islamofascists”: