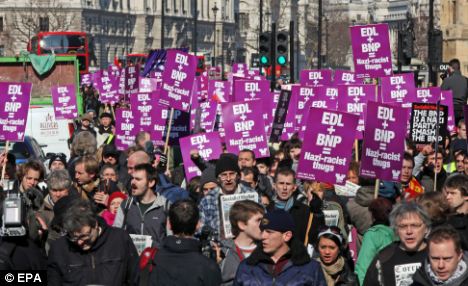 Anti-fascist demonstrators blockaded the road outside Parliament yesterday in an attempt to prevent a march in support of far-right Dutch politician Geert Wilders.

The Freedom Party leader, who attempted to enter the country last February but was detained on landing at Heathrow airport, was in Parliament yesterday at the invitation of UK Independence Party leader Lord Pearson and cross-bencher Baroness Cox to show his anti-Islamic film Fitna at the House of Lords.

Police arrested several protesters from a group who gathered in Millbank in a bid to stop the far-right English Defence League marching past Parliament in support of Mr Wilders.

Eyewitnesses claimed that police had used illegal headlock techniques to break the human chain of protesters in the road, including on a disabled member of the crowd. One young woman who was dragged away complained of high blood pressure as officers continued to lock her arms over her head – despite being horizontal on the ground.

Originally, Unite Against Fascism had announced an emergency assembly of activists opposite Parliament to protest against the EDL march. But a large group of anti-racists spontaneously took to the road and began marching towards the EDL, chanting: “These streets are our streets.” With police “kettling” their progress, a stand-off ensued with at least 150 anti-fascists blockading the road for three hours.