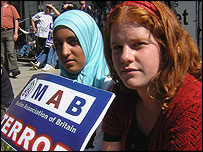 Hundreds of people have attended a vigil in memory of those killed or injured in the London bombings. Stop The War Coalition (StWC) and the Muslim Association of Britain organised the rally in Russell Square.

Crowds listened to speeches by members from the two groups and Respect MP George Galloway who blamed the war on Iraq for the London bombings. Organisers said their aim was also to show solidarity with the families of victims and the Muslim community.