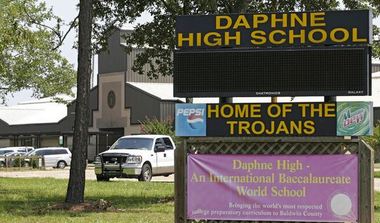 The school had a staff position open after its French teacher retired, said Meredith Foster, Daphne High’s principal. “We had to make a decision to replace that foreign language unit,” she said.

School officials believe the class will help prepare students to succeed in a global economy. But some Daphne residents are upset that the Baldwin County school system is permitting its students to learn what they call “a culture of hate.”

“When you teach Arabic, you have to teach the culture along with it,” said Chuck Pyritz, whose two sons, Isaiah, 17, and Isaac, 14, attend Daphne High. “The culture is intertwined with Islam.”

Pyritz cited the case of jihadist Omar Hammami, who grew up in Daphne, as a compelling reason that school systems should not offer courses in Arabic. “That’s another red flag for us,” he said. Hammami, who attended Daphne High, but did not graduate, is believed to have been killed a few weeks ago by members of his former Somali Islamist militant group, al-Shabab.

“This is America, and English is our language, and while I understand the alleged premise of offering Arabic at our high school, I don’t agree with it,” said Michael Rife, who lives in Daphne. “It is not just another language; it is a language of a religion of hate. I’m concerned about our taxpayer dollars going to fund such a program, because I don’t believe it has a lot of foundational value.

“It just concerns me that we’re headed down a path of further eroding our society to a Muslim-based society, or Sharia law (the moral code of Islam), and I’m not willing to let that happen without … something to say about it.”

Pyritz was also disturbed, he said, after meeting with Baldwin school officials to voice his concerns and learning of plans to expand Arabic and other language course offerings in Daphne’s elementary and middle schools.

“They’re trying to indoctrinate our children with this culture that has failed,” he said. “…Why should we want to teach our kids a failed culture when we have a culture that has been successful? All we have to do is follow our Christian culture, which has brought this nation to the pinnacle of success. … I don’t see why they would want to teach this.”