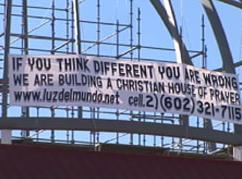 In an era saturated with absurd moments of anti-Muslim fear- mongering, mosques have become a touchstone for Islamophobia. Even unbuilt mosques have set off a wave of anti-Muslim sentiment in Tennessee, Texas, California, and most notably, New York.

Not to be outdone, the people of Pheonix, AZ were quick to call foul over the appearance of a dome-like structure along an interstate. But in the clamor over the impending Muslim takeover, these Arizonans missed one small detail – the building is not a mosque, it’s a church:

A new dome-like structure near 19th Avenue along Interstate 10 in Phoenix is the Light of the World church, a nondenominational Christian church hoping to modernize traditional worship services, a church spokesman said

Since the distinctive dome shape went up, church leaders said they have received phone calls from concerned neighbors who’ve mistaken the building for an Islamic mosque.

“It is unfortunate that people are so intolerant to differences that they aren’t willing to see that the place of worship is not a mosque,” said Tayyibah Amatullah of the Council on American-Islamic Relations’ Arizona chapter. But with so many high-profile figures selling unfounded, anti-Muslim fear to the public, is it any wonder that all many Americans can see in Islam is a phantom menace?