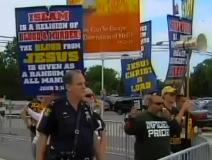 A small group of anti-Islamic protesters caused a ruckus at the Arab International Festival Friday, resulting in the arrest of several festival attendees.

The group, who identified themselves as the Bible Believers, held up signs referring to Islam as a “religion of murder” and urging Muslims to “repent” while standing in the festival’s free speech zone, located at Miller Road and Warren Avenue.

A group of counter-protesters and onlookers gathered around the area – some of them shouting at the Bible Believers and throwing water bottles, trash and shoes.

Wayne County and Detroit police, including mounted officers, quickly rallied to keep the public away from the anti-Islamic protesters. At least two people resisted, resulting in separate arrests.

Police were not able to confirm how many arrests were made at the festival.