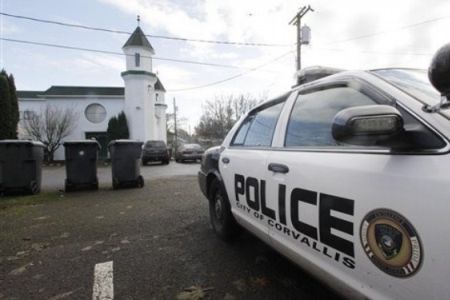 A fire was set at a mosque in southwest Houston, and the suspected arsonists were caught on surveillance video.

An automatic alarm went off early Saturday at the Madrasah Islamiah off Bintliff. When firefighters arrived, they saw smoke and quickly worked to put the flames out.

The surveillance footage is brief, but it’s one of few clues investigators have to go on. Awni Kussad, an elder at the mosque, says the video shows what appears to be two young men going to the back of the building, carrying what may be a can of accelerant. The suspects are seen in the video running to a getaway car.

“If you have a problem with the mosque and you like to build fires, we can go build a little fire somewhere. If you want to ask me or find from me what we are all about, we’d be happy to talk to you,” Kussad said. “Don’t just come and burn a place – any place for that matter – and run away like that.”

The alarm sounded when glass was broken, but there was also someone staying inside the mosque who called 9-1-1.

The crime didn’t stop a group of men from Sunday evening prayer. In the next room, the smell of smoke remained and you can see burn marks across the room.

Kussad says fortunately firefighters were able to stop it before much structural damage was done. “It’s not really a lot of damage,” he said. “It’s more moral damage than anything else.”