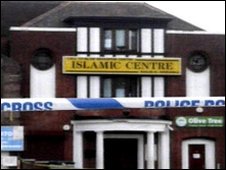 An Islamic centre in Bedfordshire has been gutted by fire in what police believe was an arson attack. No-one was injured in the blaze, which started just after midnight at the centre in Bury Park Road, Luton.

A police spokesman said there was “considerable damage” and the road was likely to remain closed while forensic teams investigated the cause. Insp Martin Peters said: “It appears an accelerant was used and our immediate priorities include who started this fire and why, and making motorists aware.”

Update:  Never a paper to pass up an opportunity to exacerbate tensions between communities, the Daily Star reports:

“Fears of a race war grew yesterday after right-wing extremists were accused of firebombing a mosque…. The attack will inflame the town gripped by race tension since riot cops broke up a ‘Reclaim The Streets’ rally aimed at police and council inaction over the taunting of the troops.”

The Star goes on to quote rent-a-mouth idiot Anjem Choudary – “there’s no telling how young extremist Muslims will react” – and a supporter of the Facebook group “Ban the Terrorists” who stated: “I think this centre was firebombed because these Muslim extremists tend to hang out nearby.”