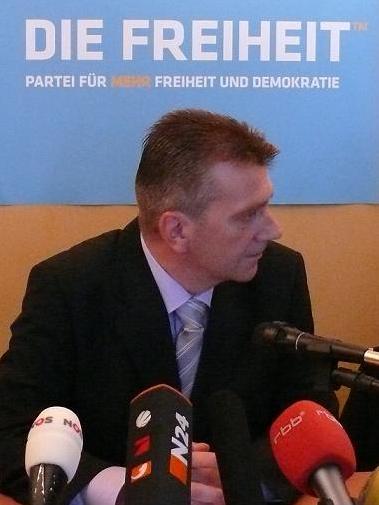 “The new party, whose slogan is ‘The party for more freedom and democracy’, speaks candidly about Islam, Islamism, Islamic law, and Islamization. Starting with the insight that ‘Islam is not just a religion but also a political ideology with its own legal system’, the party calls for scrutiny of imams, mosques, and Islamic schools and for a review of Islamic organizations to ensure their compliance with German laws, and condemns efforts to build a parallel legal structure based on sharia. Its analysis forcefully concludes: ‘We oppose with all our force the Islamization of our country’.”

Better still, from Pipes’ standpoint, “Freiheit robustly supports Israel, calling it ‘the only democratic state in the Middle East. It therefore is the outpost of the Western world in the Arab theater’.”

Pipes notes: “Germany is conspicuously behind most European countries with large Muslim populations in not having spawned a party that stands up against Islamization. That’s not for lack of trying; previous attempts petered out. Late 2010 might be an auspicious moment to launch such a party, given the massive controversy in Germany over the Thilo Sarrazin book ruing the immigration of Muslims, followed by Chancellor Angela Merkel announcing that multiculturalism has ‘utterly failed’. A change in mood appears underway.”

Still, with only “50-plus attendees” at it’s inaugural meeting, the Freedom Party has some way to go yet.