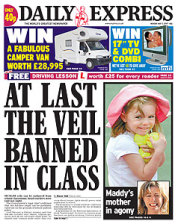 “Muslim veils can be outlawed from school classrooms, head teachers were told last night. The Government’s legal chief confirmed that the full-face niqab can be justifiably ruled out on the grounds of school uniform policy.

“Lord Falconer, a Cabinet minister, said that this also included other Islamic religious garments such as the full-length jilbab gown. He claimed that common sense rather than concerns about human rights should govern what pupils wear to school.”

A leader in the Express applauds Lord Falconer’s position:

“This is a very welcome development. For, while wearing the veil is a matter of personal choice – and accepted in our country which is famed for its tolerance – there are times when it is obvious that this Muslim symbol clashes with the British way. Sometimes it as simple as being able to see the faces of our fellow citizens as we go about our daily business. The school classroom is one such area, the courtroom is another.

“There are times when members of the Muslim community go too far and the Daily Express is not afraid to say so. The setting up of Islamic courts applying Sharia law is one such example.

“The Lord Chancellor has now made it possible for schools to say ‘No’ to the veil. Head teachers have been told that common sense does not conflict with human rights. In other words, they have been given the green light to just say ‘No’ when the occasion demands it.”