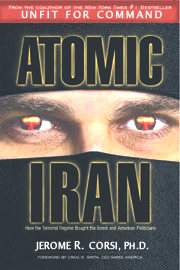 A TV commercial warning Americans that Iran intends to launch a nuclear terror attack in the U.S. has been rejected by several stations due to fears it might inflame Muslims.

Titled “An Atomic 9-11: When Evil is Appeased,” the spot, sponsored by the Iran Freedom Foundation, is based on a scenario described in the new WND Books release “Atomic Iran: How the Terrorist Regime Bought the Bomb and American Politicians,” by Jerome R. Corsi, co-author of the best-selling “Unfit for Command.”

The ad, which can be viewed on the IFF website, began a month-long run last Tuesday in 17 markets nationwide. It was rejected, however, by independent stations in Chicago, Dallas and Roanoke, Va., according to the company that produced and distributed it, Fargo, N.D.-based TVAI, or Timeless Video Alternatives International.

Steve Tweed, a TVAI working partner, told WND the ad was deemed “too politically partisan and controversial.” “One person called it propaganda,” he said.

The scenario described in “Atomic Iran” shows that a 150-kiloton improvised nuclear device exploded in New York would reduce much of the city to rubble. Some 1.5 million people would be killed instantly, with another 1.5 million certain to die over the next few days.

Tweed said some television program directors and traffic managers have been “tearing their hair out” over whether to run the ad, because they don’t want to be seen as “picking a fight with any part of the community.”

“We’ve never taken on such a valiant cause or had such a volatile or emotional reaction about any ad we’ve ever carried,” Tweed said. He explained the response was due to a “very latent, and I believe truthful, portrayal of Muslim fanaticism.”

Over at Jihad Watch, Robert Spencer is not best pleased: “And above all, we must not offend Muslims. Better to be incinerated and turned to radioactive ash than to offend Muslims.”

You remember Mr Spencer – he’s the man whose “informed and thoughtful” contributions to the discussion of Islam have been welcomed by Melanie Phillips.