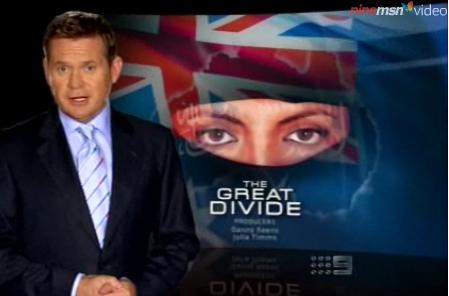 The EDL were eagerly anticipating the broadcast of an Australian TV documentary on multiculturalism (entitled The Great Divide) in which their leader Stephen Lennon (“Tommy Robinson”) was given a starring role. Overall, they must be pleased with the results. At any rate, they’ve posted the documentary on their website.

True, the EDL is described as “a far-right organisation” in the film (perhaps this was what prompted yesterday’s laughable EDL press release) and we are told that “Robinson has been condemned by many as a racist and a thug”. But that is the limit of the documentary’s criticisms of this gang of racists and their leader. Otherwise Lennon is allowed to perform his usual act – of indulging in foam-flecked right-wing rants about Islam while maintaining the pretence of being a normal working-class bloke – without the slightest challenge.

The voiceover announces: “Tommy dares to shout what others fear to say out loud – that multiculturalism has provided the perfect cover for Islamic extremists to infiltrate Britain and plot their deadly attacks against democracy.” And “Tommy” assures viewers: “We’re telling you what’s happening to our country. We’re living side by side with terrorists, Islamists, people who want to completely obliterate our way of life and our culture and convert this country into an Islamic state. They’re here.”

Accompanying the Australian film crew on a drive round a Muslim neighbourhood (or “Islamic ghetto”, as he describes it) in his home town of Luton, Lennon tells them: “This is a terrorist area. This is the hotbed, this is the heart of militant Islam. This is where the 7/7 bombers, they boarded a train in Luton.” And this entirely irrelevant point is repeated in the commentary. The reality of course is that not one of the 7/7 bombers came from Luton, and the town’s railway station simply provided a geographically convenient place for them to meet and park their cars before completing the final stage of their journey to London by train.

Prompted to express his opinion on “extreme Islam”, Lennon replies: “It is a cancer and it is embedded in every single Islamic community in this country. Every one of them, no matter what one you go to, there’s a percentage of that community who wish for sharia law, who are homophobic, who are anti-democratic, who are causing mayhem. All across the country.”

And who did the Australian film makers find to illustrate Lennon’s fantasy about “extreme Islam” sweeping the UK? Yes, you guessed it, the man they chose to interview was rent-a-moron Anjem Choudary. The disproportionate attention given elsewhere in the documentary to another unrepresentative nutter, one Ibrahim Siddiq Conlon of Islam4Australia, is at least counterbalanced by an interview with a more typical Australian Muslim who repudiates his views. But the sole British Muslim the documentary makers bothered to talk to was Choudary.

The Choudary interview is immediately followed by a characteristically paranoid declaration from the EDL leader – “it is a ticking time bomb” – and in response to a leading question from the Aussie TV reporter a pop-eyed Lennon claims: “There’s going to be a hundred thousand Anjem Choudarys.” Yeah right. This is the same Anjem Choudary who has difficulty mobilising more than a few dozen supporters to attend his stupid and provocative protests. Needless to say, the Australian documentary makers don’t think it relevant to mention that fact.

Just in case you might be inclined to dismiss Lennon’s views as the ravings of an ignorant and uneducated racist, the documentary introduces a “journalist and columnist who has long criticised British multicultural policy which allows half a million immigrants into the country every year”. Step forward Leo McKinstry of the Daily Express, who announces: “There’s been an evaporation of our national identity, social cohesion has broken down and there’s parts of Britain that just don’t feel like England any more.” (That would presumably include Scotland and Wales.)

If McKinstry had been used to illustrate how a hardline right-wing section of the British press feeds the EDL their line, that would be fair enough. But his role in this documentary is in fact to provide the EDL’s anti-Muslim racism with the appearance of legitimacy by showing that their views are not restricted to the far right.

So McKinstry’s attack on multiculturalism – “we can’t go on with this policy of saying you can come and live here but you can cling completely to your own culture and the world you came from, you can treat women badly, you can have sharia law” – is followed by Lennon warning that “if nothing changes, you’re probably five years away from English lads wanting to blow themselves up, because people are so angry about what’s going on – so angry and so feel under threat and complete oppression to do with Islam”.

The documentary further assists the EDL’s efforts at legitimisation by joining a select group of their members at a pub in central London, where Lennon announces that “we need middle England to listen, to hear our voices, to help us”.

While the voiceover intones “we discover that they’re not just ranting football hooligans – the country’s comfortable middle class are signing up”, a picture of EDL joint leader and BNP candidate manqué Kevin Carroll appears on the screen. Another individual introduced as a representative of middle England is Roberta Moore, who was only recently brought back into the fold by the EDL leadership after being threatened with expulsion because of her links with a convicted terrorist. Of course, the documentary makers saw no need to check the backgrounds of these supposed paragons of middle-class respectability.

The basic aim of the The Great Divide is to present multiculturalism in Australia as generally a success while warning against the supposed nightmare of failed multiculturalism in the UK. The documentary makers presumably thought this made for good TV and presented a “balanced” view of the advantages and potential dangers of multiculturalism. But the result, through a combination of ignorance and irresponsibility, was that they swallowed the EDL’s own lying propaganda and provided a free platform for a repulsive gang of anti-Muslim racists. 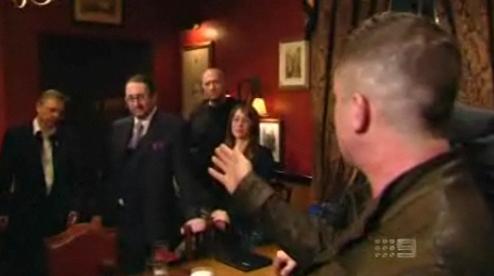