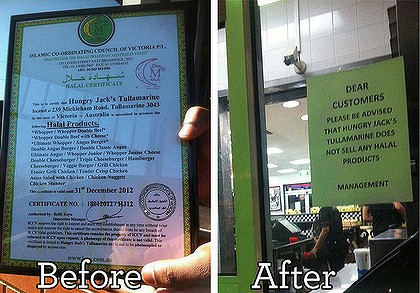 Hungry Jack’s is being targeted by angry customers who allege the fast-food company pressured a Melbourne franchisee to stop serving halal food.

The social media campaign against Hungry Jack’s stems from claims that the chain’s Tullamarine store was issued with a halal certificate by the Islamic Coordinating Council of Victoria in December that sanctioned a number of its chicken and beef burgers as halal.

News of the halal Hungry Jack’s spread across the internet and through text messages to Muslim fans who had been pleading with the restaurant to consider serving halal food. “Woo hoo! I’ve been hoping for ages that a hungry jacks becomes halal! How excitement,” one fan posted on an internet forum. Another eager customer posted a photograph of what appeared to be the genuine halal certificate.

But then last week Hungry Jack’s tweeted that none of its stores were halal and apologised “to customers led to believe otherwise by the Tullamarine franchisee”. Signs were put up at the Tullamarine store notifying customers that it did not offer halal food.

Hungry Jack’s chief executive officer Aaron McKie told The Age the company had acted promptly to stop “false claims” regarding halal food. “Our internal processes discovered the franchisee, through unauthorised claims and actions, was breaching the trust of customers and the company,” Mr McKie said.

He said all Hungry Jack’s produce was sourced from accredited suppliers and that there were some “significant operational impediments to meeting the strict halal food preparation requirements which at this time cannot be overcome”.

When contacted by The Age, the Tullamarine franchisee, who said he had owned the store for almost five years, denied he had ever displayed or sought a halal certificate, despite the photograph. He said he had been receiving “pressure’ from head office and he had no idea how the controversy had started.

The confusion has led to demands on Hungry Jack’s Facebook page for at least one outlet to offer halal food and accusations that the company was concerned about its image. “HJ headquarters decided it wasn’t a good look and asked [Tullamarine] to stop serving halal meat, even though they were certified to sell,” one post on Hungry Jack’s facebook page alleged.