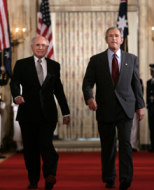 “The Howard government recently outdid its Western masters in the war on terror, announcing that it would begin banning and restricting materials that it deemed to be promoting ‘terrorism’….

“The threat to reinstate the old practice of confiscating reading materials has come true. In one recent case, Australian customs seized several titles that had been sent by a Malaysian publisher to a Muslim bookseller in downtown Sydney.

“Among them is one titled A Young Muslim’s Guide to the Modern World by Seyyed Hossein Nasr, a US-based Iranian-born academic who is not even remotely political in most of his works, as well as another book on everyday Muslim do’s and dont’s which has become almost a household name among Muslims: Yusuf al-Qaradawi’s The Lawful and Prohibited in Islam.

“Although the books have since been returned, probably after the Australian authorities realised how silly they had been to confiscate them at the first place, it shows just how strongly panic alarms can be set off by anything that sounds Islamic….”