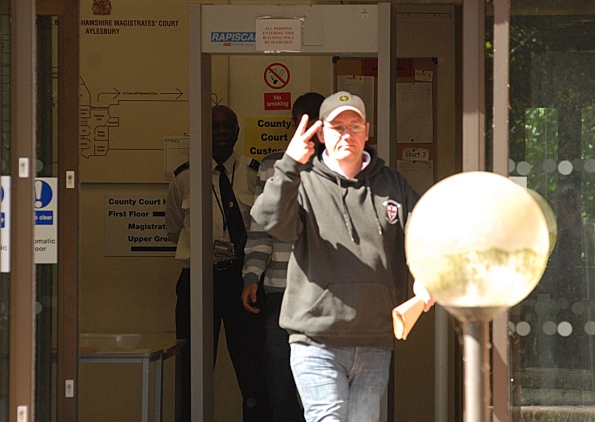 A right-wing extremist who was arrested on his way to the EDL march in Aylesbury last year for abusing police officers has had his appeal turned down. Daryl Hobson appeared at Aylesbury Crown Court on Friday in a bid to get his sentence overturned.

Hobson, 44, was stopped by police last year on May 1, as he was holding a large union flag out the car window. When stopped, Hobson insulted police officers, calling them “f***ing jobsworths” and labelled one of them “Robocop” and “a clown”. Officers eventually lost their patience when he began chanting support for a man who killed three police officers.

When describing the incident, PC Ahmed Chaudry said: “The gentleman got out of the car and came up to me and said: ‘What do you want?’ in an aggressive manner.” He said coachloads of EDL supporters began driving past, prompting Hobson to put his arms in the air and shout EDL slogans.

Police sergeants Luke Pillinger and Spencer Kervin were passing when they saw what was happening and stopped to help. Sgt Kervin said: “He got within arm’s length and shouted behind me: ‘Harry Roberts is my friend. He kills coppers’, very loud.”

Roberts was a career criminal planning an armed robbery when his gang was approached by plain-clothes police officers in London, in 1966. Roberts shot dead two officers and an accomplice killed a third. Paul Fox, whose father Geoffrey was one of the three murdered police officers, lives in Aylesbury.

The officers arrested Hobson and he was tried and convicted. He was fined £100 and ordered to pay £400 in court costs.

At the hearing Hobson admitted using the chant about the policemen but said he was doing it towards his friends, not the police. “It’s a song sung in football grounds up and down the country. Everybody has a good laugh at it. We started singing it on the way up (to Aylesbury) in the car. I wasn’t threatening at all.

“Pillinger was standing in front of me in an intimidating way like he was some kind of Robocop,” he said. “I called him a Nazi. I called him a f***ing jobsworth and a clown. I said: ‘The only thing missing on you, chap, is a bright red nose and shoes’.”

Recorder Johannah Cutts QC said: “We are of the view that he did, indeed, use words and behaviour in such a way to cause alarm and harassment, if not distress, and for that reason we dismiss this appeal.” She ordered Hobson to pay prosecution costs of £415.