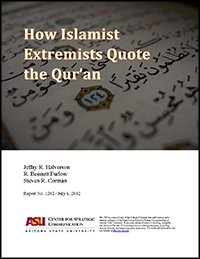 A common belief in the West is that al Qaeda wishes to impose Islam everywhere. This might be a pipe dream for the group, but a new study of their use of religious texts suggests that Islamists’ goals are much more modest.

Researchers with Arizona State University’s Center for Strategic Communication (CSC) analyzed more than 2,000 items of propaganda from al Qaeda and related Islamist groups from 1998 to 2011. They catalogued more than 1,500 quotes from the Qur’an that extremists used to support their arguments, and identified the chapter (surah) and verse represented in the quote.

Results showed that most of quotes are about enduring hardships and maintaining faith and hope in the face of attacks by enemies of Islam. The so-called “Verse of the Sword” (9:5) that says “fight and slay the pagans wherever you find them” was used only three times.

“We were surprised at the very limited use of the sword verse,” said Bennett Furlow, a research assistant and one of three co-authors of the study, “How Islamist Extremists Quote the Qur’an“. “Conventional wisdom says Islamists are bent on world domination and this verse is the justification. We found it to be insignificant,” he said.

The verses most frequently cited came from three surah, Surah Nine, Surat at-Tawbah (“The Repentance”), Surah Three, Surat al-Imran (“Family of Imran”) and Surah Four, Surat an-Nisa (“The Women”). They address enduring hardships and the importance of fighting against the unjust outsiders who oppress men, women and children.

“These findings challenge the idea of a clash of civilizations,” said the study’s lead author Jeff Halverson, a professor of communication in ASU’s College of Liberal Arts and Sciences in reference to the theory that future wars will be fought over religious identity rather than national boundaries. “What extremists are really saying to Muslims is, ‘our communities are under siege and God will defend us if we have faith and courage’.”

It is important to be realistic about Islamists’ arguments when trying to counter their influence attempts, noted ASU’s Herberger Professor and study co-author Steve Corman. “If we try to portray them as evil conquerors when their audience sees them as protectors and champions, it damages our credibility and makes our communication less effective,” he said.

The study concludes with four recommendations for the West: 1) abandon claims that Islamist extremists seek world domination; 2) focus on addressing claims of victimization; 3) emphasize alternative means of deliverance; and 4) reveal that the image of “champion” sought by extremists is a false one. Other studies have shown in fact that al Qaeda-linked militants are 38 times more likely to kill a Muslim than a member of another group – hardly the activity of a “competent champion,” the ASU study states.