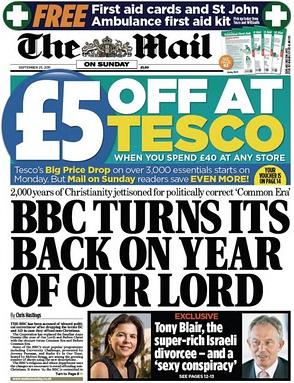 This is the front page headline in yesterday’s Mail on Sunday. The accompanying article begins:

“The BBC has been accused of ‘absurd political correctness’ after dropping the terms BC and AD in case they offend non-Christians. The Corporation has replaced the familiar Anno Domini (the year of Our Lord) and Before Christ with the obscure terms Common Era and Before Common Era.”

And the Mail‘s James Delingpole chips in with a comment piece claiming that “all reference to Christ has been expunged” by the BBC, as part of a “Marxist plot”. The BBC’s outrageous policy, Delingpole tells us, is “an act of cultural suicide. Most of us may not realise this but the ideological Left certainly does, for it has long been part of its grand plan to destroy Western civilisation from within.”

But it’s not just the Marxists who are behind the BBC’s decision to abolish the Christian era. As the Mail‘s report emphasises: “The website for BBC Religion and Ethics, headed by commissioning editor Aaqil Ahmed, who is a Muslim, is littered with references to Common Era and Before Common Era.” And this is repeated beneath a photo of Ahmed, just in case readers have missed its sinister significance. Indeed, over at his Guardian blog, Martin Robbins points that the original caption to the picture (see below) read: “End of an era: BBC head of religion Aaqil Ahmed, the Corporation say, bizarrely, the change has nothing to with Mr Ahmed.”

This nonsense has been demolished by Tabloid Watch, who point out that the Mail‘s own report provides the refutation of its scaremongering introduction. Buried at the bottom of the article we find: “The BBC said last night: ‘The BBC has not issued editorial guidance on the date systems. Both AD and BC, and CE and BCE are widely accepted date systems and the decision on which term to use lies with individual production and editorial teams’.”